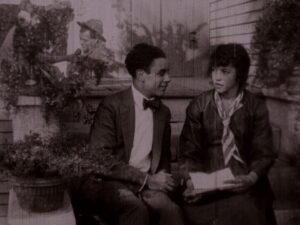 it was that glimpse of Noble Johnson that led us to conclude the “By Right of Birth” fragment contains within it a fifteen second clip from another film called “The Trooper of Troop K” (1916), making it the earliest surviving footage produced by a Black film company. This is the story of how I made that discovery with Ally’s help, and how it requires a rewriting of Black film historiography.

Read more and watch the video at the Library of Congress site.